TL; DR: When Rohan Thakare founded WisdmLabs, an open-source web application development business, he worked in a one-room, 300-square-foot office. At first, he found his clients through elance.com, but by adopting smart marketing strategies and delivering strong solutions, he grew his company into a 120-person operation. Now, WisdmLabs is working on a number of new projects, from turnkey bundles to a revolutionary way to deliver WordPress apps to entrepreneurs and startups. Whether the company’s working with clients or supporting environmental nonprofits, WisdmLabs is dedicated to making a positive impact.

When Rohan Thakare founded WisdmLabs in 2012, his goal was to create value for his company’s stakeholders and create quality applications for his clients. Although his business has changed dramatically over the last six years, the fundamental tenets haven’t.

Today, the WisdmLabs team supports everything from eCommerce, eLearning, events, and WordPress to Moodle, Magento, and Laravel, among others. The company’s ability to react to each customer’s individual needs explains why entrepreneurs, such as Atul Kumar, the owner of K21Academy, have praised WisdmLabs’ services.

“They have a very skilled and hardworking team who have gone out of their way to meet our requirements,” Atul said in a testimonial. “WisdmLabs is the first name that will cross our minds for any of our future projects.”

When Rohan founded WisdmLabs, he worked in a one-room, 300-square-foot office located in Thane, India.

“In those early days, Rohan’s biggest challenge was to convince his first employee to work for a company that had no other employees,” said Sagar Sheral, Products and Digital Marketing Manager at WisdmLabs.

But Rohan managed to land great talent, and his first employee, Praveen Chauhan, and all the initial hires still work at WisdmLabs today.

“Initially, there was no marketing involved,” Sagar said. “Most of our projects came through elance.com. Then, we began to send out newsletters and spread our name through Facebook and Twitter posts. As we started building our reputation, we created ads with Google’s AdWords and optimized our website to create more inbound traffic. There has been a lot of learning.”

Still, business wasn’t steady. One month, they would be drowning under a flood of new clients. The next month, they would face a drought of projects. Wanting to create a steadier source of income, they decided to sell their WordPress apps not just to individual clients, but to the entire marketplace.

“We had done a few WordPress projects for our clients,” Sagar said, “and we thought those applications could be turned into products that many different companies would want to use. So we fine-tuned the solutions, launched them, and had a lot of success.”

As business took off, WisdmLabs’ growing team moved to a bigger office. When that space became too small, he opened a second office 150 miles away in the city of Baner.

While WisdmLabs created a steady revenue stream by selling WordPress plugins, it never stopped building relationships with the clients who needed individual solutions for their own websites.

“Every day, our sales team receives a number of calls,” Sagar said. “They have a lot of empathy for business owners who are dealing with the stressful task of setting up WordPress websites or customizing their existing sites. The understanding between our clients and our team is very important, and the conversations they have are ongoing.”

WisdmLabs tailors its solutions according to the needs of its customers.

WisdmLabs’ sales team doesn’t quit after it has solved a client’s problem — the team stays involved, with the aim to continue to improve workflows.

“At the end of the day, the most important benefits we deliver are cost savings and time savings,” Sagar said. “Whether we’re improving the user experience or creating a budget-friendly solution for a small start-up, we always keep our customers happy.”

Sagar told us his primary job is to concentrate on the products that WisdmLabs makes.

“My team is responsible for looking at customer demand and brainstorming solutions that will satisfy that demand,” he said. “Right now, we’re developing a number of turnkey bundles.”

WisdmLabs’ goal is to help individual entrepreneurs, small start-ups, and businesses that are building eCommerce websites. 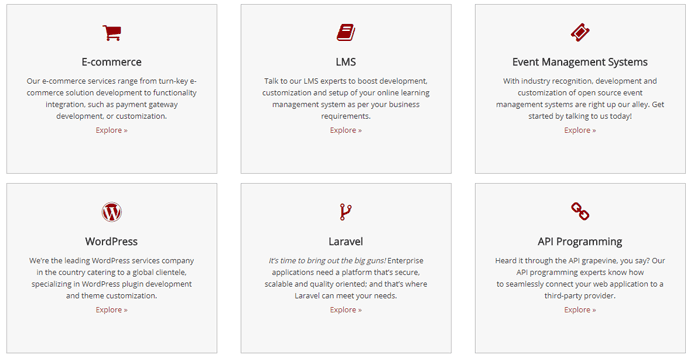 WisdmLabs delivers products that can be bundled together for a number of use cases.

“We’re trying to build business-specific bundles,” Sagar said. “Let’s say someone wants to create a basic eCommerce website. We would have a bundle that would be a simple plug-n-play solution. Installing this would set up one’s entire website with all the essential features that an eCommerce website needs. All clients need to do now is upload their product, make changes according to their brand, and Voila! They’re ready to go live. Similarly, we will be having WordPress eLeaning, events, and other bundles for all sized businesses — small, medium, or large.”

Another bundle is for customers who sell small products in bulk. And, as Sagar noted, WisdmLabs’ one-click website builder is aimed specifically at those businesses.

Sagar told us he is especially excited about a second project that WisdmLabs is developing.

“It’s called Epitrove, and it is a curated WordPress marketplace,” he said.

WisdmLabs came up with the idea because the company wanted to do something new.

“Each year we try to get out of our comfort zone and venture into new business models which have the potential,” Sagar said. “This year we happened to explore the marketplace option, and we thought this was it!”

Sagar told us that the WordPress industry has become saturated over the last few years. As a result, a lot of freelancers and development companies are building products and selling them on Envato — a WordPress marketplace.

“The problem is, a lot of these are a code bloat, especially themes, and these seem to be attractive to a user that is new to WordPress,” Sagar said. “Little do they know about the slowdown it would cause to their site.”

In addition, Sagar noted that, many times, customers do not get the right support from vendors on Envato. But, according to Sagar, the idea isn’t to compete with Envato.

“Ours is a completely different business model that sells only curated or the best products,” he said. “The popularity doesn’t matter here, what matters is how good the product is, how well is it coded, what kind of support and customer engagement the vendors have with the community.”

And Sagar noted that these factors determine whether a product will be added to the marketplace. The deciding authority would be WisdmLabs’ own products teams.

“If they need a product with one functionality, they’ll go onto Envato and find 10 that all do the exact same thing,” he said. “It’s very difficult to know which of those products work and which have serious issues, so many people end up buying poorly designed solutions that cause more problems than they solve.”

WisdmLabs offers a central location to source a number of WordPress solutions.

That’s not the only issue. Samrat Roy, WisdmLabs’ Digital Marketing Executive, told us that pirate developers find good and expensive products, violate their licensing systems, and then resell them at significantly cheaper prices.

“That reduces the incentives for honest developers to build quality solutions,” Samrat said.

WisdmLabs wants to make the process of buying WordPress apps smoother, easier, and more honest. And, according to Samrat and Sagar, that’s just what Marketplace will do.

“It will be a curated marketplace that only includes the top products in the industry, the best of the best,” said Sagar. “It will have solutions for both B2B and B2C businesses, as well as very niche solutions that only a few businesses will need.”

“Everything we sell will be authentic and will provide exceptional product support,” Samrat said. “We’re creating a site that both developers and customers can trust.”

The reason WisdmLabs has become a growing and successful company is that the WordPress community has supported Rohan Thakare and the rest of the team since day one. Marketplace is their way of giving back to the community that continues to give so much to them.

“Roughly three to five years down the line, we want Marketplace to have made the WordPress community even stronger than it is today,” Samrat said. “The entire project is about building this community. It’s a long-term mission to help developers innovate and create effective, lasting solutions.”

But, as Sagar noted, WisdmLabs’ commitment to progress doesn’t end with the WordPress community.

“We noticed that the temperatures were rising in the cities where we work,” he said. “Over the last decade, they’ve been much higher than average. So we decided to be part of 2018’s Environment Day.”

From June 4 to the 13th, WisdmLabs donated $1 for every sale it made, giving that money to charities that protect the environment. The company also did a tree plantation drive with great results.

“We got amazing support,” Sagar said. “WisdmLabs does more than just support its clients — it supports its community and the world we all share.”

Microsoft just turned your conference-room whiteboard into an app

Outlook wants to nudge you into better behavior at work

Race and education are what make U.S. income inequality even worse for some

Believe it or not, Magic Leap says its headset will ship ‘this summer’

Powerful Software for Selling More Online: Why BigCommerce is Our Choice For Fast-Growing Brands and High-Volume Businesses

Psychz Networks: How the Los Angeles-Based Host is Taking on the Global Market With DDoS-Protected Datacenters Located Across Continents

Postmates is delivering Chipotle for free this week

This Applies to Most Food Items

What Do I Need To Make It In Business?

ABOUT US
ĀLL is your news, entertainment, music fashion website. We provide you with the latest breaking news and videos straight from the entertainment industry.
Contact us: info@āll.com
FOLLOW US
© ĀLL
MORE STORIES

GigeNET Hones in on Customer Experiences and Stretches the Limits of...